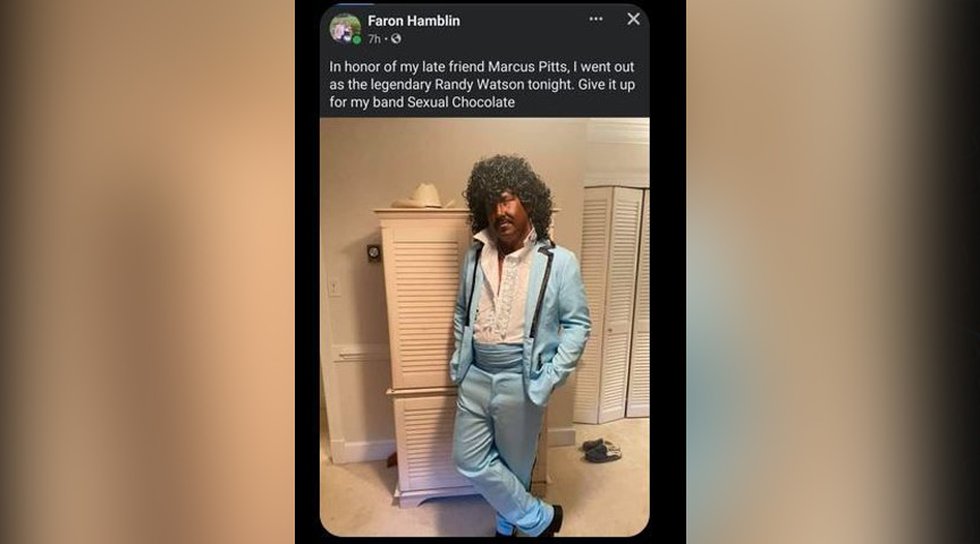 RICHMOND Co., Va. (WWBT) – A white city councilman’s decision to blacken his skin as a fictional musician in a popular movie sparks outrage. The image of Warsaw City Councilor Faron Hamblin was shared on social media.

The Richmond County man posted the photo over the weekend and quickly deleted it after people started calling it offensive. Although he didn’t respond to emails from NBC12 trying to get his side of the story for two days, he posted on Facebook apologizing: “I made a post that hurt a lot of people. and that was not my intention.

He is elected by day and a musician by night. Faron Hamblin, city councilor for the city of Warsaw, Va., On the Northern Neck, issued a public apology on his personal Facebook account. He drew tons of comments, mostly from people asking him why he was apologizing.

The music lover wrote: “In honor of my late friend, I stepped out as legendary Randy Watson tonight. Give it up for my group Sexual Chocolate, ”referring to a scene from the movie Coming to America. He said he did it out of respect. Hamblin has since deleted the photo, although he says he doesn’t think there is anything wrong with wearing dark makeup.

“Do you think that in many cases this is just ignorance? Do you think it’s fair, “I didn’t know?

“I think so, in many cases,” replied Dr Simpson.

She explains the hurtful story of white people who blacken their faces.

“The black-faced minstrel was born from people who came down south and watched black people dance, and the way they were entertained…

Here is why it became offensive.

“The characters they made up, Jim Crow, who was kind of a lazy character, going for that kind of character, and Zip Coon, who was someone who dressed up and used a lot of bad words so that all the characters develop through the minstrel played in stereotypes, ”said Simpson.

She says it’s important for the context – even today.

“When you don’t know what the story is, it may seem like, based on your knowledge of where we are today, it may seem like it’s harmless and we’re all having fun, but by doing that, we are actually hurting people, ”Simpson said.

“Some people might ask in 2021 – if my favorite singer was Michael Jackson; if my skin is white, is it still unacceptable? NBC12 asked.

“Yes, it almost is, unfortunately, and I think you can pay your respects and go house to house for Halloween dressed as Beyoncé without blackening your face because that’s her skin color.” This is not its distinguishing feature, right? It really isn’t, ”replied Dr Simpson.

Hamblin said in the post which has now been deleted, “what really cuts deep” is the fact that he was called a racist after darkening his face. “I try to be a good person and help other people no matter who they are,” he continued.

Again, the city councilor did not respond to interview requests from NBC12.

Want the best NBC12 stories delivered to your inbox every morning? Subscribe here.