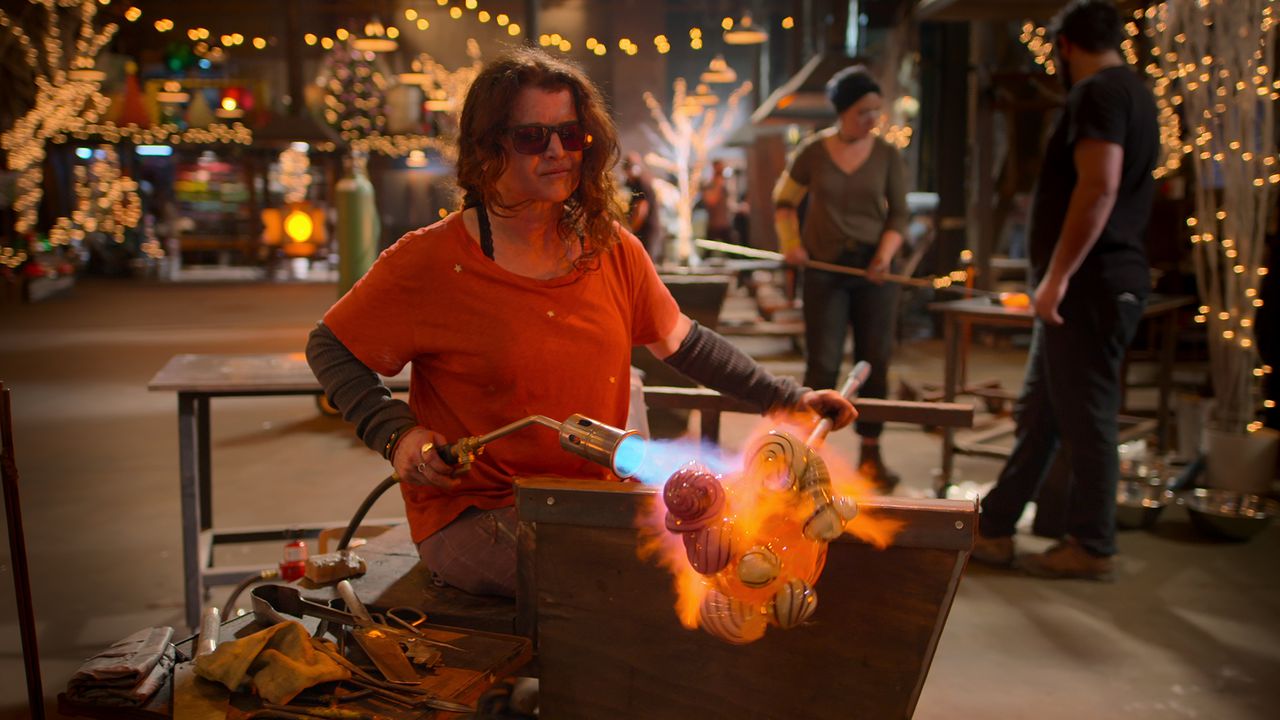 Whether it’s cheering on a Portlander who participates in “Jeopardy!” or noticing that local spots appear on a TV series, there is something satisfying about watching a show or movie that has a little Oregon flavor to it.

Luckily for us, a variety of Oregon-related projects are hitting our screens. Some spotlight talented bakers, others involve talented people who have spent time in Oregon, and still others were filmed here or set in Beaver State.

Here’s a look at recent and upcoming shows and movies with Connections in Oregon.

“Blow Away: Christmas“: The competition series that tests the skills and artistic abilities of professional glassmakers returns for a special holiday edition. The contestants feature five veterans from past seasons, including Portlander Andrea “Andi” Kovel, who, along with his partner Justin Parker, founded Esque Studio. Kovel and Parker have designed for clients such as Lenny Kravitz, Cindy Crawford, Maya Lin and Michael Jordan. On “Blown Away: Christmas,” Kovel will join his fellow competitors in the Hot Store as they go head-to-head in Christmas-themed challenges. The winner will receive a prize of $ 10,000, and an additional $ 10,000 will be donated to a charity of their choice. (Starts streaming November 19 on Netflix)

“Great performances: reopening night of the San Francisco Symphony Orchestra”:Among the performers featured on this opening night recording of the 110th season of the San Francisco Symphony is Esperanza Spalding, who grew up in Portland and pursued a distinguished, award-winning career as a bassist and songwriter. (Premieres on PBS November 19; airs noon, November 21, on OPB)

“Christmas Cookie Challenge”: Karen Thi, a baker from Portland, and Kyra Wright, a baker from the Washougal, Wash. Area, will both put their skills to the test in episodes of the Holiday Cooking Contest Series, hosted by Food Network personalities Ree Drummond and Eddie Jackson. The episode premiere of Thi is scheduled for 9 p.m. on November 25 (Thanksgiving night). Wright’s episode is scheduled to air Dec. 2 at 9 p.m. on Food Network. The bakers will create a festival kitchen and compete for the $ 10,000 prize.

“The sex life of students”: The comedy series co-created by Mindy Kaling is about four undergraduate students who navigate life, studies and relationships while attending a prestigious university. But don’t ignore Gavin Leatherwood, who lived in the Portland area and played wizard Nicholas “Nick” Scratch in the Netflix series, “Chilling Adventures of Sabrina”. In “The Sex Lives of College Girls”, Leatherwood plays Nico, the brother-in-law of Leighton (Renee Rapp), one of the four main characters. (Starts airing November 18 on HBO Max)

“How to deal with John Wilson”: The New York-based documentary maker returns for a second season of quirky episodes, in which he, as the press release says, engages in “self-discovery, exploration and observation as he films the lives of fellow New Yorkers while trying to give daily advice on six deceptively simple new topics. In Season 2, the writers credited for the episodes include Susan Orlean, who before becoming a writer of the New Yorker and the bestselling author of “The Orchid Thief,” among other books, lived in Portland, where she wrote for Willamette Week, among other issues. In another vaguely local connection, Nathan Fielder, executive producer of “How To With John Wilson,” is also executive producer of “Wondermill,” an HBO series reportedly filmed in Oregon. (Season 2 premieres at 10 p.m. Nov. 26 on HBO)

“Cooking”: Expect the good vibes fans saw on “Making It” to continue on this holiday baking show, which is produced by “Making It” co-star Amy Poehler. Her fellow “Saturday Night Live” veterans, Maya Rudolph and Andy Samberg, host the contest, in which home bakers compete in themed challenges and compete for cash prizes. Among the bakers will be Reggie Gonzalez, of Hillsboro, and Stephanie Moikeha, of Portland. (Starts airing December 2 on Peacock)

“Foodtastic”: Keke Palmer hosts a new food sculpture competition show. Contestants will be asked to use food items – “from vegetables and butter to fruit and cheese,” as the press materials say – to create sculptures inspired by Disney films and properties. Among the cast, four people from Oregon: Chris Foltz, an ice sculptor from Bend; Trey Woods, an Eugene sales association; Liz Marek, cake decorator and business owner from Beaverton; and Dean Murray, a chef and culinary artist from Dallas. (Starts airing December 15 on Disney +)

Christmas TV movies: In addition to the plethora of holiday TV movies on the Hallmark Channel (including Oregon’s Katee Sackhoff in “Christmas Sail”), Lifetime, Netflix and others, a screenwriter with Oregon roots is responsible for a pair of Christmas movies aired on the Roku Channel. Lisa Hepner, who lived in Beaverton for many years, wrote “Christmas Wish in Hudson” and “Christmas Lovers Anonymous”. (Streaming on the Roku Channel until Christmas)

“The velvet metro”: Todd Haynes is one of the most original filmmakers working today, and he also happens to live in Portland. Haynes’ documentary on the Velvet Underground is an unconventional and critically acclaimed exploration of the legendary New York-based band, whose early impact was tied not only to their talent, but to Andy Warhol’s support for the group. In a Hollywood Reporter article, cinematographer Ed Lachman says that, for the documentary, Haynes “found the visual metaphor of art” and “counterculture” that enlivened the underground New York scene. 1960s from which the group was born. (Streaming on Apple TV +)

“The girl of the woods”: A spooky series set in the Portland area, this supernatural drama from Crypt TV is about a place where, as the synopsis says, “Monsters are real, kept at bay behind a mysterious door in a cult settlement. The work of the Runaway teenager Carrie is guarding that gate, but when bizarre events begin to shake the sleepy mining town, she must enlist the help of new friends Nolan and Tasha. The group becomes an unlikely trio of monster slayers, determined to save their lives. loved ones. ”But are there even more hidden secrets? Ah, probably. (Streaming on Peacock)

“Woods”: Keri Russell stars in this horror thriller set in a small town in Oregon (although it was shot in British Columbia.) Guillermo del Toro is one of the producers, and the plot has to do with a schoolteacher (Russell) and his brother (Jesse Plemons), who is also the local sheriff, as they deal with a troubled boy and, as the press documents say, “The Myth of the Dreaded ‘Wendigo'” . The film will be available on digital platforms on December 21 and will be released on Blu-ray and DVD on January 4, 2022.