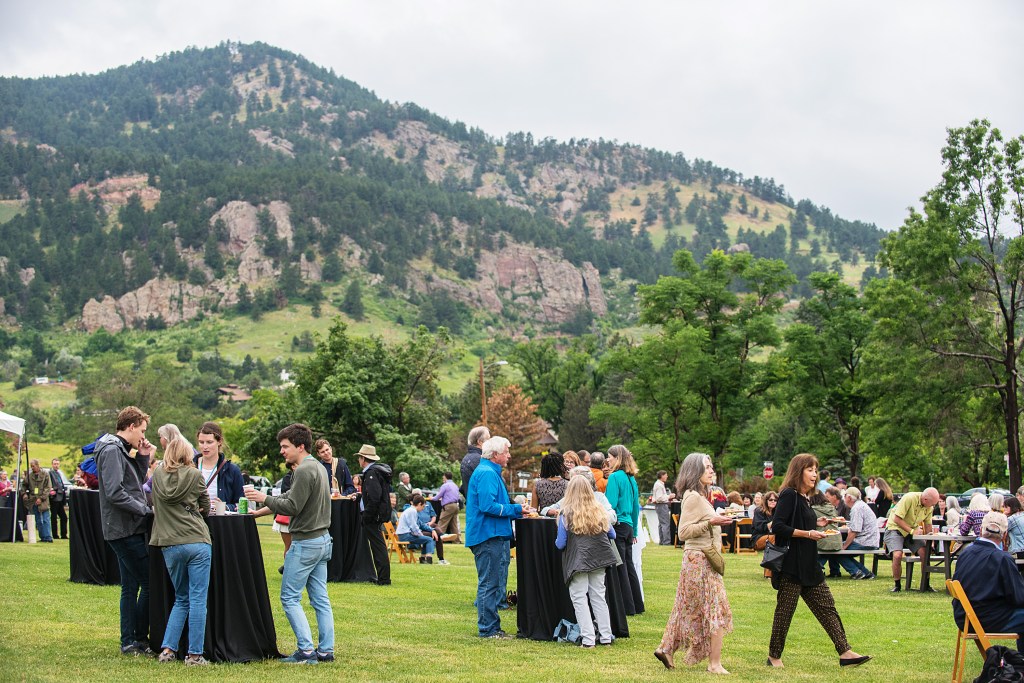 On Friday, couples and groups of people scaled the hill and drifted through the wet field beneath the Flatirons on the opening night of the Boulder International Film Festival.

The location and ambiance was unlike any other year of the film festival. But that’s what makes it special – and for Kathy Beeck, that’s what will make it memorable.

“It’s a very different year,” said Kathy Beeck, co-founder of BIFF. “It’s usually early March – it’s usually winter. It’s the hottest BIFF ever. It’s pretty fun to do something different. We love to spice it up. I think in the years to come, we’re always going to look back on that film festival and say, “You remember that year we did Chautauqua, and it was summer, and that was the BIFF. hottest ever? It will stand out.

About 550 people attended the 17th Boulder International Film Festival at Chautauqua Green on Friday. Most years films are shown at the Boulder Theater, but in light of the COVID-19 pandemic, this year’s four-day event has been moved outside and pushed back to June. Although the heat wave announced by Kathy Beeck did not come true.

“It truly is a miracle that we are all here,” said Robin Beeck, co-founder of BIFF, commenting on the rain and hail that hit the city just hours before the event. “We had to take our chances a long time ago and think about whether it would really work or not. “

But after months of hard work and cooperation with the weather, it all fell into place.

“It’s so wonderful to see everyone,” she said. “Everyone has a smile on their face. “

The Friday night movie was “Summer of Soul”. Robin Beeck said when she first saw him she knew he had to perform during the BIFF.

“The energy is so great, and by the end of the movie you just feel like a different person, and you’re motivated and uplifted, and you’re just singing and dancing,” she said.

Music producer Lisa Bell has searched for bands across the Front Range for the past nine festivals, she said.

So far, she has found new artists every year.

Nine musicians will perform from noon to 6 p.m. Saturday at the annual singer-songwriter showcase at Chautauqua Green. The event is free and open to the public

“I think it’s a really fun concept to have that outside, and it’s almost like a mini music festival tomorrow,” Bell said.

The producers and director of the film “After Antarctica”, broadcast on Saturday at the Auditorium Chautauqua, mingled at the event.

Director and co-producer Tasha Van Zandt said she was thrilled to be a part of the festival. Van Zandt and co-producer Sebastian Zeck said their inspiration for the film was Will Steger, who appears in the documentary.

“It was really special,” she said. “His persistence and lifelong endurance, whether it be the climate crisis or the expeditions, has really inspired us to see how we can chart our own paths and really make an impact on the work we do,” a she declared.

Steger said he enjoys being a part of the film and having the opportunity to share his legacy with others not only in Colorado but around the world as well.

“This is not your ordinary documentary,” he said. “It doesn’t follow a standard format. There are several layers. “

When choosing the movie lineup for this year, Kathy Beeck said they thought about the past year and a half and chose fun adventure, food and music movies – things people were missing out on.

“This year, we really felt that people needed to be edified and to experience some of the things that were missing,” she said. “It’s just a special festival.

Kim Snyder, who directed “Us Kids,” attended the festival on Friday with Sam Fuentes, who features in the film and is also a survivor of the 2018 Stoneman Douglas High School shooting in Florida.

“Us Kids” plays Saturday at 9 p.m. on the Boulder High School soccer field. The community is free to attend.

Snyder said this was his third film focusing on gun violence.

“We thought it would be constructive and important for the community, and I hope it will bring some kind of hope and inspiration through voices like Sam,” she said.

Fuentes said the film gives a voice to his generation and the next to fight gun violence and other forms of injustice.

“Ultimately it’s about humanizing the problem,” she said. “It’s my life now. This is how I have to live. I cannot change this on myself. There are things we can do as citizens, as legislators, to prevent these atrocities from happening. “

Another first this year is virtual cinema, which allows people to buy and watch movies at home, said Kathy Beeck.

“We didn’t want to just do virtual, but we’re adding that because it’s a nice element,” she said.

The festival, which continues until Sunday, features 40 films from 10 countries. Festival tickets for Saturday and Sunday are on sale at biff1.com. Individual tickets cost $ 18 and $ 17 for people 65 and over. Some of the films shown during the festival are available on the virtual cinema at biff1.com/virtual-cinema/ until July 3.