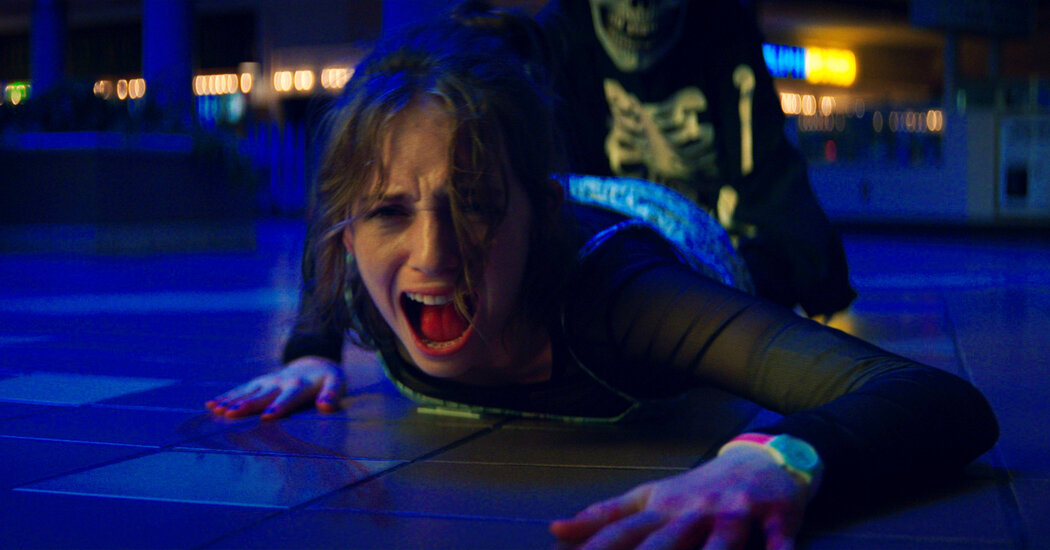 Every month, streaming services in Australia add a new batch of movies and TV shows to their library. Here are our picks for July.

“The street of fear”

For three consecutive Fridays in July, Netflix will release a new horror feature film, each based on RL Stine’s “Fear Street” book series. In the first, a group of teenagers in 1994 investigate supernatural links to a pattern of murders that occur periodically in their town, Shadyside. The following films go deeper into the past – particularly 1978 and 1966 – building a story that is partly a chilling mystery and partly a conscious homage to the horror genre itself, in all of its gory and ominous varieties.

‘I Think You Should Go With Tim Robinson’ Season 2

The first season of this anthology of quirky, fast-paced comedy skits became a leftist success, helped by fans on social media who turned a handful of the show’s moments into viral memes. (Ever seen a photo on Twitter of the suspiciously defensive guy in the hot dog costume? It’s from “I Think You Should Go With Tim Robinson.”) Created by Robinson and Zach Kanin, the series is very silly but has a serious point of view, involving the many ways in which a stubbornly obnoxious or reckless person can disrupt society’s tendency to tone down rudeness.

This stylish action comedy stars Karen Gillan as Sam, an assassin who relies on the help of a team of rightly fierce women played by Angela Bassett, Michelle Yeoh, Carla Gugino and Lena Headey. When Sam makes a choice that annoys a Mafia boss (played by Paul Giamatti), she and her team must suddenly fend off a team of vengeful thugs. “Gunpowder Milkshake” was co-written and directed by Navot Papushado, which makes the film look like a luscious cartoon.

‘Never have I ever’ Season 2

One of the nicest surprises of the 2020s (in a year that hasn’t had many) was high school student Mindy Kaling’s semi-autobiographical sitcom about a talented Native American teenager who often disappoints her strict mother. At the end of the first season, the heroine Devi (Maitreyi Ramakrishnan) had unexpectedly landed two potential boyfriends, and in the process worried her mother at her wit’s end. The second season will continue Devi’s story about impossible romantic dilemmas, while also deepening what it feels like to be a smart youngster who holds high expectations.

All ten episodes of this period crime drama found a devoted fan base when they originally aired in 2013, if not large enough audiences to warrant a second season. Set in the mid-1960s in Singapore, “Serangoon Road” has Don Hany as Sam Callaghan, an Australian-born tough guy who works for a detective agency in need of his skills. The work stirs up a lot of conflicting feelings in Sam, who spent time in a prison camp as a boy and sees the seeds of new conflict growing in a region of the Pacific rocked by revolution and corruption.

The first season of comedian Simon Rich’s weird and wonderful humorous anthology series “Miracle Workers” was about low-level Heaven employees, trying to stop a bored God from destroying Earth. In the second season, a handful of brave peasants tried to survive a violent clash between aristocratic families. The third season is set on the American border in 1844 and follows a motley collection of dreamers and outlaws on a westbound train. As always, “Miracle Workers” features the same core cast – led by Steve Buscemi, Daniel Radcliffe, Geraldine Viswanathan, and Karan Soni – but mixes their personality types, to keep the energy as unique as the premise.

“Wake up in fear”

The 1971 film “Wake in Fright” – based on Kenneth Cook’s 1961 detective story – was controversial when it was released but has since been hailed as an Australian cinema classic. The book and film were then adapted for this 2017 two-part miniseries, which updates the story in the 21st century and changes some details while retaining the essential plot. In this version, Sean Keenan plays John Grant, a teacher who finds himself stranded in a mining town and soon finds himself drawn into the local world of drunken frenzy and shady plans. Like the book and the movie, “Wake in Fright” TV is intense and unsettling, but it’s also an enlightening character study.

Based on a popular podcast of the same name, the medical melodrama “Dr. Death” stars Joshua Jackson as a Texas neurosurgeon who has a bad habit of maiming or even killing his patients. Alec Baldwin and Christian Slater play the doctors who begin to suspect that their charming and successful colleague is a charlatan – or worse, a sociopath. Stephen Frears directs the first two episodes of this series on real crime about how even in a profession driven by science, the appearance of confidence can be dangerously persuasive.

This showbiz satire follows a cash-strapped B-movie producer who tries to pay off some debts by “accidentally” killing an aging star during a heavily insured production. Robert De Niro plays producer, Max Barber, while Tommy Lee Jones is actor, Duke Montana – a grizzled old western hero who turns out to be extremely difficult to murder. Morgan Freeman also appears, as a gangster pressuring Max. “The Comeback Trail” was co-written and directed by George Gallo, remaking an obscure 1982 image that combined elements from “The Producers” and “The Ladykillers”.

In this Australian western, Simon Baker plays Travis, a sniper struggling with his guilt after the massacre of an Aboriginal tribe in 1919. When he reluctantly returns to the Northern Territory more than a decade later for chasing the ruthless warrior Baywara (Sean Mununggurr), he asks the nephew of the killer Gutjuk (Jacob Junior Nayinggul) – one of the survivors of the massacre – to help in the hunt. Written by Chris Anastassiades and directed by Stephen Maxwell Johnson, “High Ground” is a dark adventure film about people confronting a nation’s violent past.

“The war of tomorrow”

Amazon recently got into the blockbuster business: first with Eddie Murphy’s “Coming 2 America,” and now with this reportedly $ 200 million sci-fi thriller originally intended to be the Paramount’s big Christmas Day 2020 theatrical release (before the pandemic changed those plans). In “The Tomorrow War”, Chris Pratt plays a man responding to a message from the future, where desperate humans seek reinforcements from the past to help fight the aliens ruling the world. The stellar cast also includes JK Simmons, Yvonne Strahovski, Betty Gilpin and Sam Richardson, each adding their own unique energy to this explosive special effects show.

There is something oddly appealing about watching super rich people stroll through multi-million dollar estates. In Luxe Listings Sydney, the wealthy in question are looking for stunning new Australian homes, which they find with the help of three experienced and very competitive real estate agents. Like similar property finder shows, part of this one is about the challenge of pleasing discerning customers – but it’s even more about the wide variety of jaw-dropping mega-mansions available for those with dough.

Heidi Klum and Tim Gunn resume their reality TV competition series – which follows the basic format of their old show “Project Runway” – with designers whipping up eye-catching clothes on a tight deadline. In “Making the Cut”, however, contestants travel the world for inspiration. Rather than sweating on a sewing machine, designers are focusing more on their own design, coming up with iconic looks that could be part of the next big global brand. The first season featured strong personalities and clever outfits; expect more of the same from season two.

“The pursuit of love”

Emily Mortimer wrote and directed this three-part miniseries adaptation of Nancy Mitford’s semi-autobiographical novel about the generation of young aristocrats sometimes referred to as ‘the bright young’, who challenged old British values ​​in between. two wars. . Lily James and Emily Beecham play cousins ​​struggling with the traditional processes of entering society and getting married, though their closest emotional bond has always been to each other. Mortimer brings this story to the small screen with panache, using a catchy visual style and a soundtrack filled with anachronistic pop music, making issues of the past more modern.