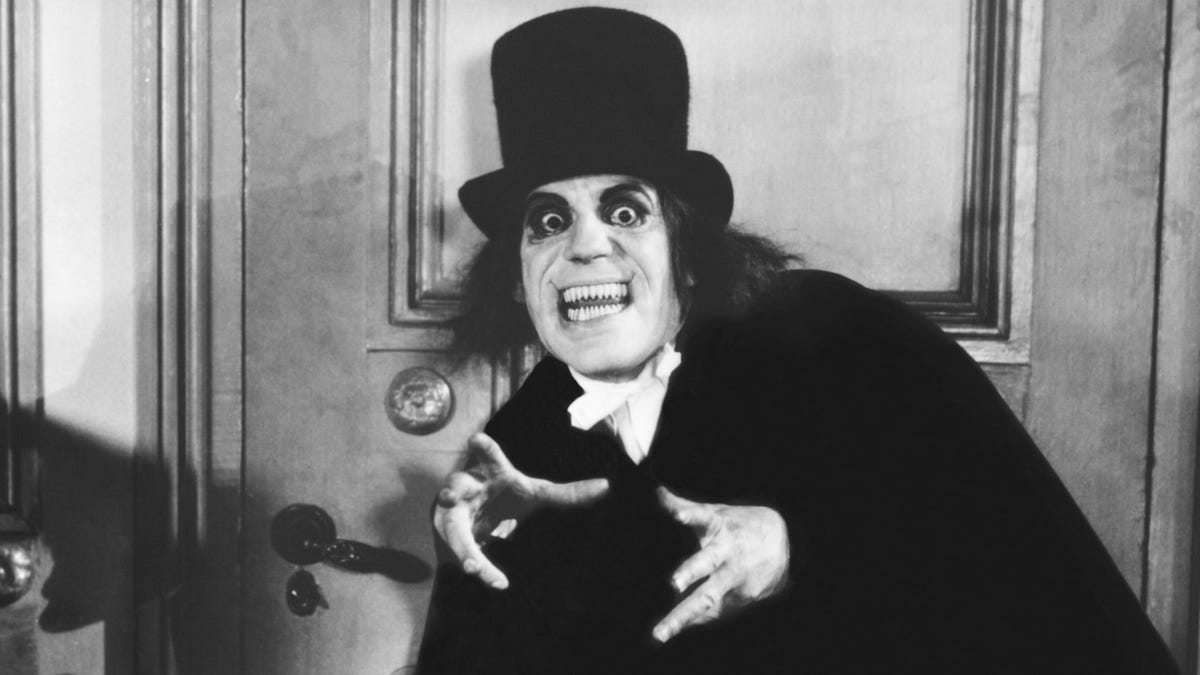 In the freezing depths of the winter of 1920, a Hungarian film crew traveled through Budapest and Vienna to shoot a silent horror film featuring a vampire haunting the dreams of a woman trapped in an asylum. Drakula Halála was the first screen appearance of the world’s most infamous bloodsucker. Although the movie is long gone, the monster still haunts us.

The first wave of silent era monster movies are all but gone. We know they existed, but no known copies have survived. Some were destroyed in fires, others were simply thrown to make room in safes belonging to the studios. The most famous of those lost films, London After Midnight, is still remembered today, thanks in large part to the iconic stills of the great Lon Chaney in his macabre makeup.

The echoes of these first cinema monsters are found in our features as modern creatures. This Halloween, we cordially invite you to travel through the dark tombs of celluloid terror to uncover the sinister remains of forgotten films that living souls no longer see.

Bloodthirsty werebeasts are a perennial favorite with monster fans. The first werewolf films include Werewolf of London (1935) and The Wolfman (1941), but the film’s first werewolf was not a wolf man – he was a wolf woman. The Werewolf, a two-reel short film from the silent era released in 1913, features silent film actress Phyllis Gordon as the lead lycanthrope.

The 18-minute film follows a Navajo woman named Kee-On-Ee who is abandoned by her husband and sends her daughter, Watuma, to avenge her. Watuma is able to go from woman to wolf, and she accomplishes her mother’s revenge. It’s worth noting that the first werewolf to hit the big screen was a product of witchcraft, not a wolf bite.

Horror experts believe the film was based on Werewolves, a story by Canadian author Henry Beaugrand that appeared in the August 1898 edition of Century Magazine. The origins of the first werewolf film are therefore probably Canadian. It is not known exactly when it was lost, but a fire in 1924 destroyed many of the negatives of Universal images kept in the studio vault on the East Coast. If copies of The Werewolf survived this fire, they might have been lost in 1948 when the executives of Universal destroyed the negatives of most of their silent films – flammable films were expensive to store and could be recycled in a lucrative way, as the old movies themselves weren’t considered valuable.

The first screen adaptation of a HG Wells novel was The First Men on the Moon of 1919. Based on Wells’ 1901 book of the same name, this was not the first science fiction film – this distinction belongs to the Moon Voyage of 1902, which survives today – but new iterations of Wells’ first travel account to the moon. continue to captivate the imaginations of moviegoers.

The British-made silent film follows a scientist named Cavor and curious viewer, Bedford, as they ascend the moon in a sphere covered with a gravity-defying substance called cavorite. Once the explorers reach the alien surface, they encounter the Selenites, a bunch of strange humanoid natives of the moon, and adventures ensue. The author of Twenty Thousand Leagues Under the Sea Jules Verne was not a fan, criticizing the lack of scientific basis for the “mythical” nature of cavorite.

Updated adaptations of The First Men in the Moon have appeared over the decades. The feature films of the same name and story arrived in 1964 and 2010, and Star Trek fans will appreciate the audio version released in 1997 starring Leonard Nimoy, William Shatner, and John de Lancie. It is not known when the last copy of the 1919 British film went missing. In 2003, a writer named Robert Godwin discovered film photos and documents relating to the silent film, shedding light on more details.

Dracula is one of the most filmed stories in monster cinema, but the vampire’s first appearance on the big screen is little more than a footnote in movie history. A year before Max Schreck terrified moviegoers as Count Orlok in Nosferatu, a 1921 Hungarian film fleshed out the first screen appearance of the world’s most famous vampire: Count Dracula. Drakula Halála translates to “The death of Dracula” or “The death of Dracula”. Although the film’s antagonist is named after the character of Bram Stoker, the story doesn’t have much else in common with the novel. The film follows a woman who checks into an insane asylum, where she is seized with grim visions of a malicious being who claims to be Count Drakula.

Made against a backdrop of chaotic political violence under the authoritarian Hungarian regime, this silent horror film was said to have been co-written by Michael Curtiz, later director of White Christmas and Casablanca. It has had theatrical performances in Hungary and Austria, but the last known recording of the film dates back to the spring of 1923.

Completing the cycle from page to screen and back again, a Hungarian novelization of the film written at the time of release has emerged in recent years. A 2010 essay by Gary D. Rhodes of Queen’s University in Belfast, Ireland included the first English translation of the novelization, and in February 2021, the prose adaptation of Drakula Halála was published in paperback.

Twenty years before the mighty Godzilla first wowed audiences around the world, another giant monster hit theaters in Japan: the one and only King Kong. The first King Kong film produced in Japan, titled Wasei King Kong, arrived in 1933. Very little is known about this lost monster film. Five years later, a new King Kong movie was released, with a title that translates to King Kong Appears in Edo or The King Kong That Appeared in Edo.

The giant monkey costume for this movie was created by special effects master Fuminori Ohashi. Ohashi continued to work as a consultant for the original Godzilla costume used in the 1954 feature film Godzilla, which kicked off the kaiju (giant monster) genre that continues today. From the very beginning, the origins of King Kong and Godzilla have been closely linked.

The holy grail of the lost monsters movies is London After Midnight. For decades, moviegoers and horror fans alike have waited for the chance to see this film from horror pioneers Tod Browning (who helmed Universal’s 1931 classic Dracula, as well as the following year’s Freaks. ) and Lon Chaney (1925 Phantom of the Opera star). Browning realized while Chaney wore unsettling makeup that he was designed to play the dual roles of hypnotist Professor Edward Burke and a mysterious monstrous villain whose look inspired the bogeyman in the film. Favorite of Sundance Film Fest 2014. The Babadook. The bizarre plot revolves around murder, hidden identities and, of course, vampires. If your interest is piqued, the full script for the film is available for viewing online.

Shortly after the film’s release in the 1920s, a frightening crime was associated with the film – a young Irish housekeeper was murdered in Hyde Park in London by her lover, who claimed he had gone mad by Chaney’s chilling performance in London after midnight. . The man was found guilty and sentenced to death for his crime.

The last copy of the film was likely destroyed in a fire in an MGM safe in the late 1960s. Although the film is considered lost, stills from the film survive and a reconstruction of the story has was created around still images. Like many silent monster movies, it may be lost, but its legacy lives on.