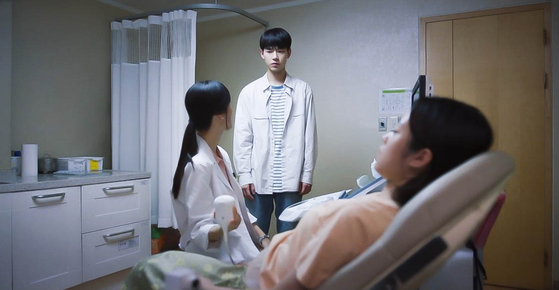 The tvN series “Our Blues” (2022-) features a teenage character going through an unwanted pregnancy. [TVN]

Teenagers take over Korean television. The small screen spotlights young people born after the turn of the century and puts them at the forefront of entertainment programming – a change for channels that have lacked early life stories as TV audiences age.

Generation Z, generally defined as those born between 1996 and 2010, are the focus of shows like KBS’s “Capitalism School,” in which they are given 1 million won ($790) and must think of ways to increase their funds. Mnet’s “Generation Z Self Survival” follows teens challenged to live without their phones for 36 hours. The actors are trotting prodigy Jeong Dong-won, born in 2007; singer Yoon Min-soo’s son, Yoon Hoo, born in 2006; late rock star Shin Hae-chul’s daughter, Shin Ha-yeon, born in 2006; and basketball player Hyun Ju-yeop’s son, Hyun Joon-wook, who was born in 2009.

Original shows on over-the-top (OTT) platforms have also expanded their narratives into the teenage world. Tving’s “Adult Trainee” (2021) series explored teenage sexuality and MBN’s “High School Mom and Dad” shines a light on teenage parenting. Darker genres like Netflix’s ‘Juvenile Justice’ (2022) and Seezn’s ‘Hope or Dope’ (2022) have started the discussion about youth crime. The currently airing tvN series “Our Blues” also features a character in high school who is going through an unwanted pregnancy.

Generation MZ (Millennials and Generation Z) is a term commonly used in Korea to collectively address the vague concept of young people born between the 1980s and 2010s. But the current television trend has shifted to specifically target Generation Z.

“The dialogue evolved to separate the Z from the MZ,” said pop culture critic Kim Heon-sik. “More shows are targeting or featuring teenagers, who are receptive to content trends and have a big influence on them as well.”

“Teens face an ever-changing world, but neither school nor other adults teach them how to cope,” said pop culture critic Kim Sung-soo. “There haven’t been a lot of teenagers on TV or shows talking seriously about the issues they’re going through. We’re seeing a slight change.”

While shows like “Capitalism School” and “High School Mom and Dad” add an educational aspect by having personal finance YouTubers or professional therapists on board as mentors, most Gen Z shows are primarily based about showing things as they are, without interventions. These formats help bring out each teen’s personality and introduce viewers to Gen Z trends through their daily lives. For example, in “Capitalism School,” Shin Ha-yeon offers to create messaging app emoticons to increase the million won given to him. Jeong Dong-won visits a popular personal finance YouTuber, himself born in 2008, for advice. Hyun Joon-wook is reselling photo cards of popular anime characters – a popular resale investment trend among today’s younger generations, ranging from merchandise of K-pop idols to luxury fashion items.

The mainstream TV audience in general has steadily aged more and more as younger generations use YouTube, OTT and TikTok services instead. TV stations are trying to widen their audience to include young people, and the influx of teen shows is the result.

“Parents in their 30s and 50s who have children in their teens are our primary target,” said “Capitalism School” producer Choi Sehung-beom. “The target audience for most KBS entertainment shows like ‘2 Days and 1 Night’ is 50+. There aren’t many other shows that might appeal to relatively young moms and dads. , so we targeted that audience.”

“High School Mom and Dad” began airing in March and there are already talks of a second season due to its success. MBN’s main audience is also people in their 50s and above, but this show targets people between the ages of 20 and 49. Although the show is criticized for highlighting the taboo subject of teenage parenthood – in a country where pregnancy is considered shameful even for adults – it is also praised for its realistic depiction of what teenage parents are up to. Koreans face.

One of KBS’s “school of capitalism” teenage girls offers to create messaging app emojis to boost the million won she was given. [KBS]

Showing the everyday life of Gen Z has also had the unintended effect of helping the generations better understand each other.

“When teenagers couldn’t order from an electronic kiosk or make reservations online without their smartphones, they then asked, ‘Does that mean my grandma couldn’t?’ “, said Lee, producer of “Generation Z Self Survival”. Eun Jung. “Their reactions led them to understand the older generations.”

However, there are concerns about the presentation of teenagers at the forefront of these shows.

“As episodes go by, the shows tend to become a basis for gossip rather than seriously listening to teenage concerns,” critic Kim Sung-soo said. “Shows should refrain from using them simply as entertainment without serious dialogue.”

Although MBN’s “High School Mom and Dad” is criticized for highlighting the taboo subject of teenage parenthood, it is also praised for its realistic depiction of what teenage parents face in Korea. [MBN]

“Teenagers on TV mean they are recorded from an early age,” said pop culture critic Jeong Deok-hyun. “For the shows to be balanced, it is necessary that the shows go beyond simple observation and that experts give advice to adolescents.”

While it is significant that the Korean media talks more about teenagers, critics warn against seeing teenagers as a monolith after watching such shows.

“To generalize the MZ generation is very condescending,” reviewer Jeong said. “It can actually further cut off communication between older and younger generations.”

“All teenagers are different and don’t always understand each other either,” critic Kim Heon-sik added. “Defining that all teenagers are in some way is a risky thought process, but trying to address what teenagers are today is a positive attempt.”