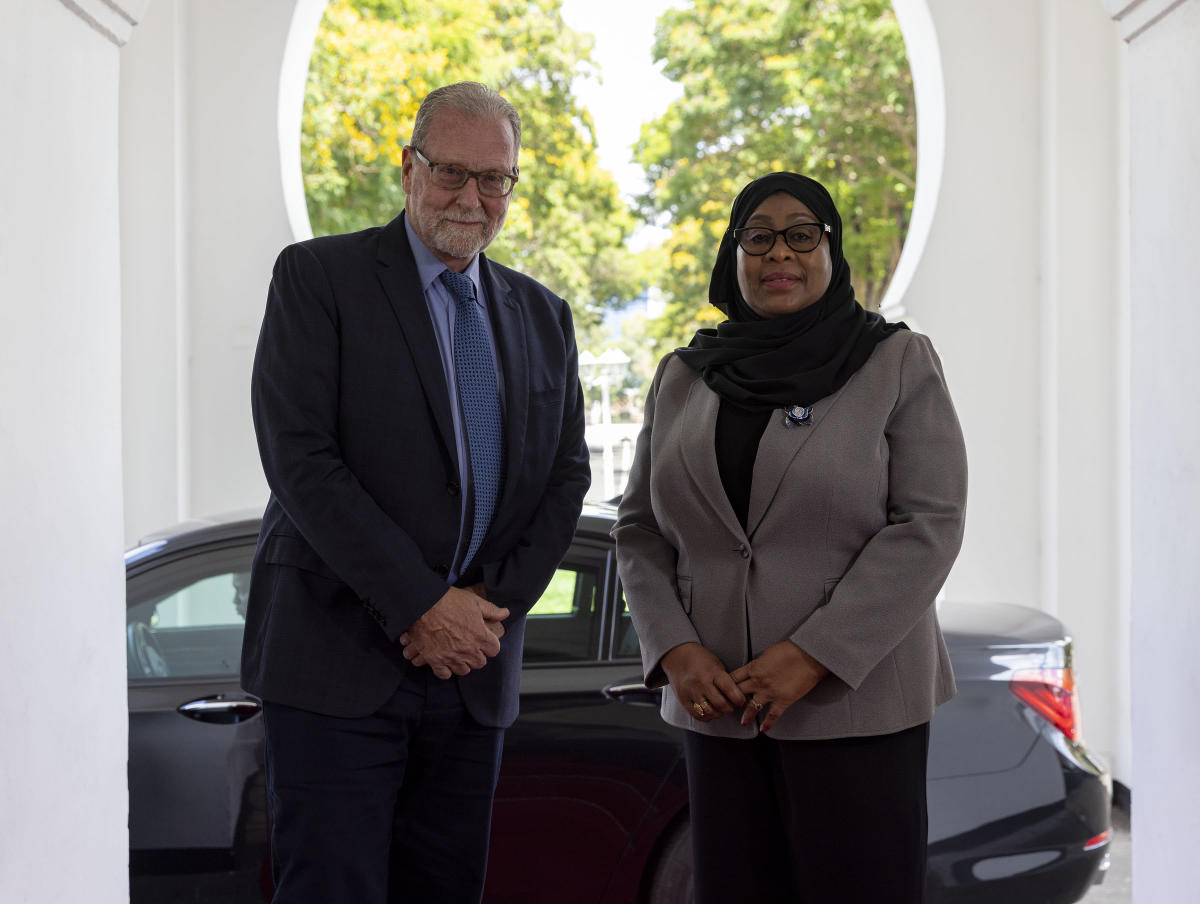 Near. Hassan and Peter Greenberg in Dar es Salaam

President Samia Suluhu Hassan, the first Tanzanian woman to lead her country, arrives in New York fresh from a visit to the White House with Vice President Kamala Harris.

President Samia will be in New York for the world premiere of Peter Greenberg’s world television show, Tanzania: The Royal Tour, in New York on Monday, April 18 at the Solomon R. Guggenheim Museum, as well as the Los Angeles premiere on Thursday, April 21 at the Paramount Theater at Paramount Pictures Studios.

“This is a very special, intimate and personal journey to and through a country, seen through the eyes of its leader…” says producer and host Peter Greenberg. “It’s a pass for all, a deep immersion in history, culture and environment at a critical time in Tanzania’s history.” And the president was Greenberg’s tour guide as they criss-crossed the country, from his small fishing village in Zanzibar to flying over Mount Kilimanjaro; from spanning the Serengeti to Tanzanite mines, from searching for the big five to investigating the country’s anti-poaching efforts.

Please find the link to the trailer of Tanzania: The Royal Tour here: TANZANIA: THE ROYAL TOUR TRAILER
Since taking office in March 2021, a year ago, President Samia has embraced an ambitious economic development plan, encouraging women-led businesses and strengthening health care, above all reversing her predecessor’s Covid denial. and making vaccines available to the public. Another main objective is the promotion of tourism, with the aim of increasing the number of international travelers from the current 1.5 million to 5 million in the next 5 years, by presenting Tanzania as a dynamic tourist destination and the many opportunities for investment that are offered in his country. The President’s visit to the United States also provides him with an opportunity to promote Tanzania’s economic development and investment opportunities.
Tanzania is an extraordinary destination with 500 miles of coastline along the Indian Ocean dotted with the legendary Spice Islands and Zanzibar right next to its mainland. The country’s cultural and natural assets are second to none, seven destination wonders are UNESCO World Heritage Sites, including Kilimanjaro National Park, home to Mount Kilimanjaro, Africa’s highest mountain; Serengeti National Park; Ngorongoro Conservation Area; Selous Game Reserve; Ruins of Kilwa Kisiwani and Ruins of Songo Mnara; Zanzibar’s Kondoa and Stone Town rock art sites.

Some images of Tanzania can be viewed and downloaded here.