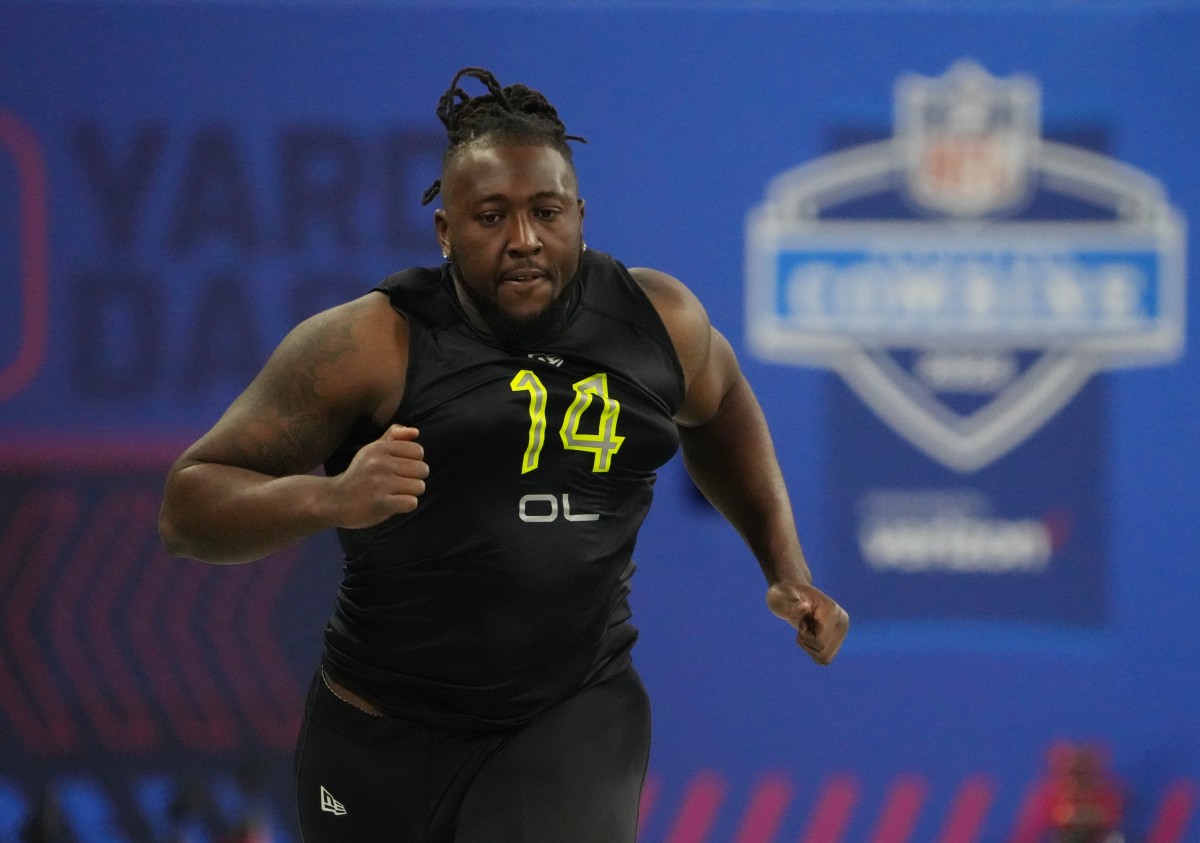 Good size and length for an inside offensive lineman; played 1,247 at left guard, 508 at left tackle and 171 at right tackle. His versatility is appealing but I think his best fit is at OG.

Very compact stance – it’s light on his hand with a coiled base ready to explode. However, it has pre-snapshots; on base blocks and down, he’s in his compact snake-like stance ready to attack, but he’s more upright and sometimes not in a three-point stance when shooting – which is what he’s often been told asked to do at UNC.

Ezeudu also possesses exceptional grip strength at the point of attack; if he puts his hands inside, it’s game over for the defenders. He keeps his elbows tight and punches with authority. His punch is tight, overbearing and heavy – it can be late at times – but that’s more of a pass protection issue.

Explodes out of position with power, cutting through contact on blocks with exceptional overall strength. Separates defenders on blocks – good attacking angles with one hand on lower back and the other around the breastplate – great control.

His upper body strength particularly stands out – he has bouncer throwing customers out of the bar kind of control and power when washing down defenders along the line of scrimmage. Effective overall in head-up base blocks, although he tended to look down on contact, leading well-timed defenders to avoid contact around his edge; he executes good general positioning when in line against defenders in his immediate area.

Has the speed and flexibility of the foot to cross the face of Technique 3 on playside reach blocks. Does a solid job of supporting blocks while moving laterally; if his hands go inside, he restricts the defender’s working space by bringing him closer; was solid maneuvering his hips out to create the seal; excellent base strength to torque and pop on contact to get the defender out of play when at OT.

Effective as a rear blocker that adapted well to post-snap defensive maneuvers; showed excellent awareness and processing through plays to suppress teammates’ errors and account for defensive changes. Eliminated several blitz linebackers who tried to undermine and make chase tackles – he’s a heady player who diagnoses before and after the shot as a run blocker – he’s marginal in pass protection (wrestled Pitt, 2021).

At the back, stays low on the snap, walks to the side of play and uses his power and wide frame to hinder defenders. Maintains his feet in lateral motion to close penetrating LBs when engaged with a DL. Good overall ability to frame his blocks on the game and backhand; it takes advantageous angles in contact with a solid overall level of skate.

Ezeudu has a lot of experience in setting up power/gap type schemes; he does a solid job of kicking off LOS and adjusting to his target with solid overall speed and fluidity, and he has an effective jump that allows him to stay square at LOS and enter an inside gap with more control.

Ezeudu possessed strong overall body control when pulling; his hat was a little too high while sending off the end man on the line of scrimmage, but he did a good job of getting to the second tier and harassing the defenders with determination and effort.

I also felt like he would have more pop on contact when kicking, but he does a really good job of adapting to the defender and giving options to the ball carrier; if a defender is narrow at blocking down tackles, they gain the outside shoulder and use the wrong arm technique against the defender to leave RB space on the outside.

Does a good job placing his hips inside the defenders hips that don’t restrict the C gap, earning that defender’s inside shoulder pad, and using his wide frame and sturdy nature to create a seal.

Ezeudu works well on combination blocks (DEUCE/ACE – OT/OG) with good timing and a good sense of when to take off or stay put depending on the second level flow. Maintains a wide base ready with active eyes – stands hip to hip with teammate, establishes hands and transitions well when climbing.

Does a good job climbing to the second level and locating defenders. Good short zone quickness allowed him to close in width and locate, using his wide frame and length to cut through defender angles. Rarely stacked or dropped by linebackers; its power and ability to lock and cross proved dangerous and effective.

Ezeudu has some technical issues that stem from his feet which are exploitable more specifically when lined up with an attacking tackle. His kick-slide has wasted steps and he keeps his grip (outside) foot well away from its frame, making its base too wide.

He struggled with speed, but that’s not necessarily down to a lack of range; there is little conviction or patience in his feet at OT; too often he let his base shrink, giving defenders opportunities to scramble. His 45s and vertical sets weren’t always smooth and there was a jerky nature, due to the feet and pre-snap position at OT.

The level of his pad increased as he retreated, which minimized his base strength and ability to anchor. Generally speaking, he is very grounded and can block defenders when he keeps his hips low and confident in his technique; however, Florida State Q2 12:53 a.m., Notre Dame Q3, 4:40 a.m., and Pitt Q1, 8:00 a.m. were all pieces where his poor technique drove him to the ground – high hips, undecided feet, off balance, etc.

He tended to keep his hands low and wide, which combined with the late-commitment nature exacerbated his problems and exposed his chest. Ezeudu can be late with his hands and he kept his hands relatively low despite there being plenty of space between him and the defender

His ability to frame blocks and his ability to diagnose before and after the snap suffered when falling back in pass protection, although he still did a solid overall job seeing the bounces and positioning himself to manage Games.

A lot of his warts come from his pass protection, he’s a lot more natural to come forward and attack – one of his best pass protection attributes on the tackle is when he skips sets, that which is a much more blocking type of execution.

He’s not a bad pass blocker, he just needs work – he’s marginal mainly due to the basic traits of athletic ability and overall strength – the technique itself is marginal. Other than the outside foot to OT, he does not play outside of his frame. Not a size bender in contact, and plays with good overall balance.

He is good when he can hold onto and hold onto blocks by leveraging his grip and core strength; he does a solid job managing counter-moves and replacing initial contact under the defenders’ breastplate, allowing Ezeudu to lift upwards which blocked the defender’s forward momentum.

Strong mirror skills to stay ahead of defenders at OG. Does a good job – once hands are established – keeping defenders out of the pocket. Showed cunning and patience from distance, baiting defenders with commitment to force their forward momentum.

Ezeudu’s competitive tenacity and passion was evident throughout his strip. He was still looking for work at LOS and he has several games on tape where he is 20 yards throwing blocks. The work ethic and footballing character would have been excellent in North Carolina.

Overall, Joshua Ezeudu is a physical, aggressive run blocker who does a good job overall on playside carries, back scoops, and he can work well into the second tier of combo blocks.

It has great overall grip strength to lock in and hold, very good overall power to move around, solid curvature, and good foot distance/speed. I really enjoy the combination of power and athletic ability. His footwork on the LOS while blocking the run is solid.

He’s a work in progress in pass protection and his best fit at OG. As a run blocker, he plays controlled and balanced, but that’s not always the case when running back in pass protection. Ezeudu’s footwork in pass protection lacks confidence and is erratic. When framed well, he has the anchor to sink and absorb power moves and does a solid job of reflecting speed as a guard.

Ezeudu has the luxury of not having to play; the Giants have Max Garcia, Jamil Douglas, Ben Bredeson and Shane Lemieux competing for left guard.

OL coach Bobby Johnson can try to fix Ezeudu’s pass protection issues before he has to see the pitch, even though most of his tape issues were at OT. Ezeudu’s base power and athletic ability is causing excitement and he will have a chance to start inside at guard in year one.

Join the Land of the Giants community