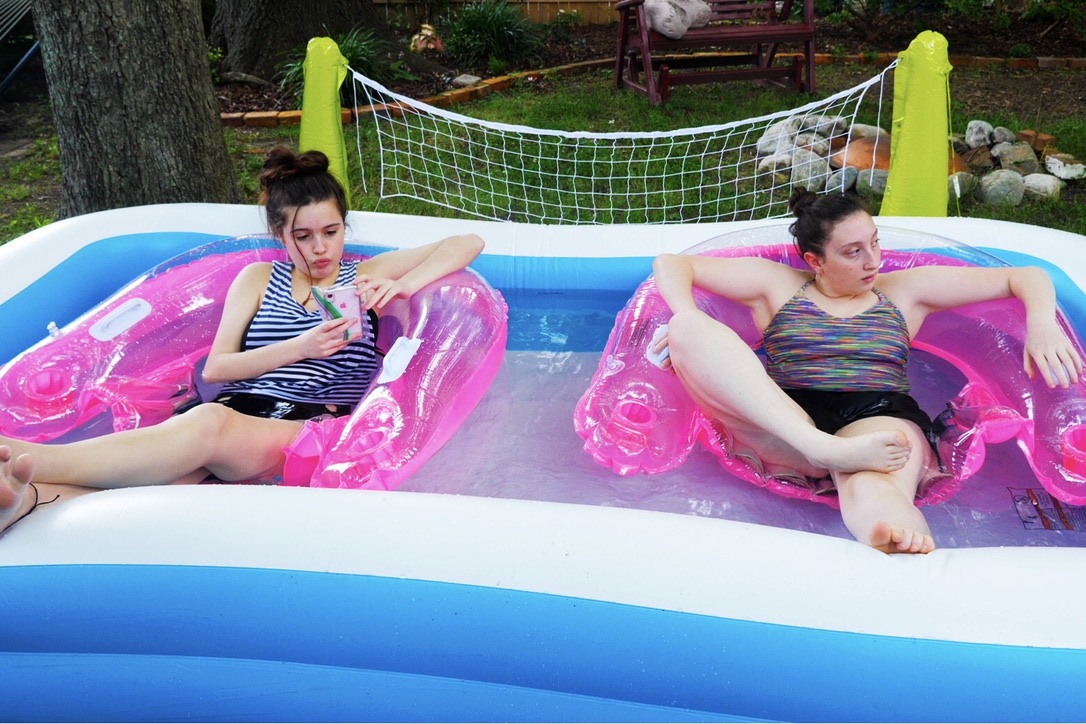 WILMINGTON – It was a year and eight months ago when the world apparently closed. The spread of Covid-19 was declared a pandemic by the World Health Organization on March 11, 2020. Internationally, people were isolated inside their homes, prevented from working or seeing their loved ones, without doing anything other than wondering what was to come next.

Filmmakers in a hurry, however, weren’t twiddling their thumbs. Instead, they pushed their fingers on the record button, with few safe alternatives to pursuing their craft other than turning the lens “inward.”

This is how award-winning filmmaker Rodrigo Dorfman describes “Quaranteened”. The documentary on his own home will have its world premiere Sunday at 2 p.m. at Jengo’s Playhouse, as part of the Cucalorus Film Festival 2021.

READ MORE: How is Cucalorus 27 different? A lot, but above all a return to events in person

TOO: ‘Where is the future of the festival’: short film blocks at Cucalorus offer a unique cinematic experience

Dorfman has always filmed his children but began to turn the cameras seriously on his four teenage daughters at the start of the pandemic. Her film opens with a voicemail message from one of their schools, announcing that students will learn temporarily from home. It ends with a less promising message from the district: another nine weeks of distance learning.

At first, Dorfman thought of the idea of ​​filming as a way to occupy and entertain his children, but throughout his intuition he told her that the blockages were a long-term deal. As an immigrant, he had already lived with uncertainty and did not want his children to have to suffer a similar trauma.

“I knew what was going to happen and I said, ‘You know what? I will try to tone it down and tone down the blow as much as possible, ”he said.

After about a month of working with his daughters on the project, he could see a full story unfold. He interviewed the four girls, continuing the question-and-answer sessions until he felt they had said all they needed to say.

The final product tells the story of a blended middle-class family, as they face the anxiety of the pandemic and the loss of their ordinary life, while finding ways to heal their boredom. In one scene, which became the movie poster, two of the girls are floating in an inflatable in an inflatable pool in the backyard.

“I think that’s where the movie is sort of. It’s that time to float, ”Dorfman said. “Not even in the ocean. Float in a small pool in your backyard and get the most out of it.

The film follows the family as they get closer. Dorfman, his two stepdaughters and two biological daughters were entering their fourth year together at the time.

“Maybe that’s what it did to this generation, to all of us, is that it really allowed us to be more intimate with our loved ones and to find more time to be together and to treat each other. with the others, ”Dorfman said.

One of Dorfman’s favorite scenes is nearing the end, when he captured the girls joking in the bathroom. One wears makeup; another tries to cut her hair, following an online video. The older one simultaneously engages in a playful argument with the other two about the size of each. They measure each other against the bathroom door with a mechanical pencil, arguing for over an inch here and there, and laughing about it all.

“The camera is so close to them. At this point, they’re completely unaware of it, ”Dorfman said.

The laughter fades and a girl suggests erasing the markers from the wall. Then the eldest daughter asks in passing: “You don’t want these beautiful memories?

“They’re all both unattended and full of life, funny and relaxed and arguing at the same time, and the camera is really on them,” Dorfman said. “For a filmmaker, it’s so rare to have such access.

He said the experience was “once in a lifetime”.

Soon after, the eldest daughter was packing her bags for college. The movie reached a stopping point, but the pandemic, as we all know, continued.

Based in Durham, Dorfman has now screened his films at Cucalorus for a decade. It typically completes one feature film each year, or at least one short film, to submit. “Cucalorus is my home,” he said.

After capturing the 55 minutes of “Quaranteened,” viewers can proceed to the 4:30 p.m. screening to capture another perspective of Covid-19 – or in the case of this film, nine perspectives.

“One (Nine)”, an 83-minute anthology, premieres at the Thalian Hall Black Box Theater. The film is a collection of nine different experiences of isolated female directors in different parts of the world: Carmen Sangion from South Africa; Dorothee Wenner from Germany; Lydia Zimmermann from Spain, Shengze Zhu from China and the United States; and Veninger, Mina Shum, Isa Benn, Slater Jewell-Kemker and Jennifer Podemski from Canada. The creators are between 20 and 60 years old.

In the early days of the pandemic, executive producer Ingrid Veninger could say that what was happening internationally deserved a movie. She offered more than 40 female filmmakers around the world to recruit a small group over a 10-day period, from March 20 to 30, 2020. The invitation revealed that the collaboration would be a zero-budget project.

“There was a kind of urgency in making this movie and getting a glimpse of the different experiences that women have around the world and different perspectives,” Veninger said. “For everyone to say yes during this really focused time was pretty miraculous, actually. “

Although most of the women live on opposite ends of the globe and are strangers, the last group of nine bonded by similar feelings of isolation, alienation, confusion and uncertainty, all experienced during the pandemic, Veninger explained.

“It was the connecting link,” she added.

The women made a pact to trust each other in the process. Each filmmaker was given complete freedom to create their individual chapter of approximately 10 minutes. A start and stop were not predetermined, nor were any link transitions. Instead, the women each shared a word that represented what they were feeling in the present moment: encounter, flight, rage, touch, together. Veninger’s word was birth.

“We were doing our films in the spring, and even though there were so many deaths,… nature was right – it continued,” Veninger said. “There was so much sorrow in our humanity, and yet nature was being born. “

It was around Veninger’s granddaughter’s first birthday. Her 28-year-old daughter isolated herself by her side in Ontario. In addition to meeting each other, they were detached from other children, families and the whole community.

Her part of the film subtly incorporates the energy of the words of other filmmakers, suggests Veninger, when the baby “meets” buds on trees or the mother and daughter are shown “together.”

“There is like a thematic way that these words circulate and weave through all the chapters, which was not heavy, which was not artificial, but of a kind of energy,” she said. declared.

After all participants committed to the project on the last day of March, they toured in April and May. In the summer, they shared some early edits with each other, and a supervisory team remotely altered the sound, color grading, and other minor aspects.

The final mixing took place in the fall. The filmmakers unanimously made the most important decisions about the project, such as how it went from chapter to chapter, the flow of the final credits, opening sequence, exposure and the distribution.

The screening at Cucalorus will mark the film’s US premiere. It has already been screened at the Female Eye Film Festival in Toronto.

Veninger arrives from Canada for the festival, bursting his Covid-19 bubble for the first time since the start of the pandemic. She has been teaching at a distance and isolating herself with her family since March 2020.

Other films dealing with Covid-19 are also showing at the festival in 2021, including “Wuhan Wuhan”, a 95-minute observational documentary. It takes viewers to Wuhan, China, where the novel coronavirus originated, during the months of February and March 2020.

“This film goes beyond statistics and dirty headlines and puts a human experience in the early days of the mysterious virus as Chinese citizens and frontline healthcare workers grapple with an invisible and deadly killer.” , indicates the description.

“Wuhan-Wuhan” will screen Thursday at 10:30 am at the Thalian Hall Black Box Theater.

There are also quite a few short films delving into the life the virus has led the world to:

“Death is our business” directed by Jacqueline Olive
Saturday • 1:00 p.m. • Thalian main course
This 30-minute play takes viewers to New Orleans funeral homes at a time when the per capita death rate from Covid-19 was the highest in the country. Ordinarily set in a bustling, jazzy city, the film follows funeral directors and staff grappling with time: restrictions, rest for the deceased, and comfort for those they have left behind.

“Little sparks” directed by Denali Schmidt
Friday • 10:15 am • Thalian Main
In 16 minutes, viewers will follow three young students learning from home in the Bronx during the pandemic and seeing the challenges they faced.

“Now let’s sing” directed by Dilsey Davis
Friday • 4:15 pm • Thalian Black
This 14-minute documentary follows an interfaith choir in Durham who are forced to make changes, singing from miles away, in the wake of Covid. It’s not just about the music, however. The interracial choir grapples with the police killings of African Americans.

“Proscenium” directed by Allyson Packer and Jesse Fisher
Friday • 1:15 p.m. • Thalian Main
How did real and virtual space collapse during the pandemic? This nine-minute short film takes place “through the architectural landscape of Dallas, Texas and the filmmaker’s personal computer.”

“Udaan (to hover)” directed by Amman Abassi
Friday • 4:15 pm • Thalian Black
A Pakistani woman emigrates from Karachi, Pakistan, to a small college town in Arkansas. But when Covid strikes and her mother is denied entry into the country, she is faced with spending the first year of her new life on her own.

“We stay in the house” directed by Kiyoko McCrae
Friday • 4:15 pm • Thalian Black
At around 14 minutes, this is an intimate portrait of four New Orleans mothers. Women must take care of their families and themselves through Covid. It is a story of personal loss against the backdrop of a health crisis.