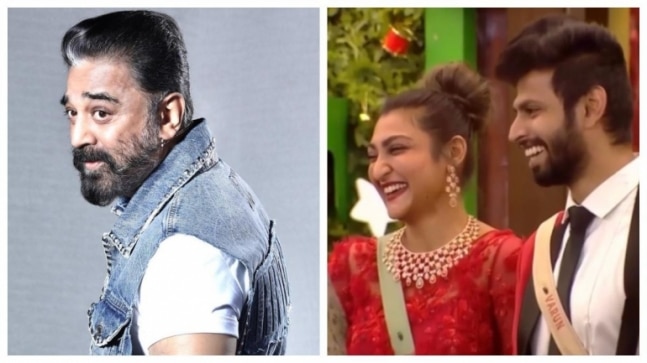 On Sunday, December 26, Kamal Haasan greeted the audience on the Bigg Boss set and spoke of the first double elimination of this season. He then asked them to keep it a secret and interacted with the contestants. On Saturday, December 25, Kamal Haasan spoke individually with the candidates and highlighted their negative and positive points. He said, “I gave you privacy. I hope you all kept it to yourself. I want you all to play well and make it to the final. My remarks are just advice for you. . “

KAMAL HAASAN ASKS CANDIDATES WHY THEY SHOULD BE THE WINNER

In an interesting task, Kamal Haasan had the competitors sit down in pairs. Roommates should explain why they should vote for themselves and why they should not vote for their couple. The five pairs for the task were Ciby-Niroop, Amir-Varun, Raju-Akshara, Pavni-Thamarai and Sanjiv-Priyanka.

Speaking of him and Ciby, Niroop said: “I gave my 100 percent and played the game individually. I don’t think I was influenced by anyone. There have been many accusations. against me. I thought about them and changed everything I could. I feel people like what Ciby does. However, I don’t know if he has shown his full potential or if he understands the game. “

Amir, while speaking about Varun, said his involvement was less. He also pointed out that Varun is loud and does not listen to others. Varun said that Amir came to the show much later and therefore did not deserve the title.

Speaking about Thamarai, Pavni said the premiere did not understand what the problem was until she raised her voice. Thamarai said: “It is a big problem for me that I came here. I see it as family. If I win, it is a victory for my art and the people of my village. Pavni is not as brave as I. She plays the tasks well, but that’s not enough for this game. “

AKSHARA AND VARUN ARE DELETED

Initially, Kamal Haasan revealed that Akshara had been kicked out. As she said her farewell to the rest of the contestants, Kamal Haasan surprised them by saying that Varun had also been sent off. Thamarai, who shares a close bond with Varun and Akshara, has broken down.

Akshara said, “I am very happy. I was exhausted, so I’m happy to be going home. In this house you cannot argue, you have to attack people. I think I couldn’t do that. being kicked out with my best friend, Varun. “

Varun said, “I made a movie and walked into the house. Even the people in my house don’t know who Varun is. When the Bigg Boss opportunity presented itself to me, I thought if I had to grab her. would get a bad rap if they went to the show. I realized that it’s our actions that will give us a good or bad reputation. I had confidence in myself. I think I did my best. better.