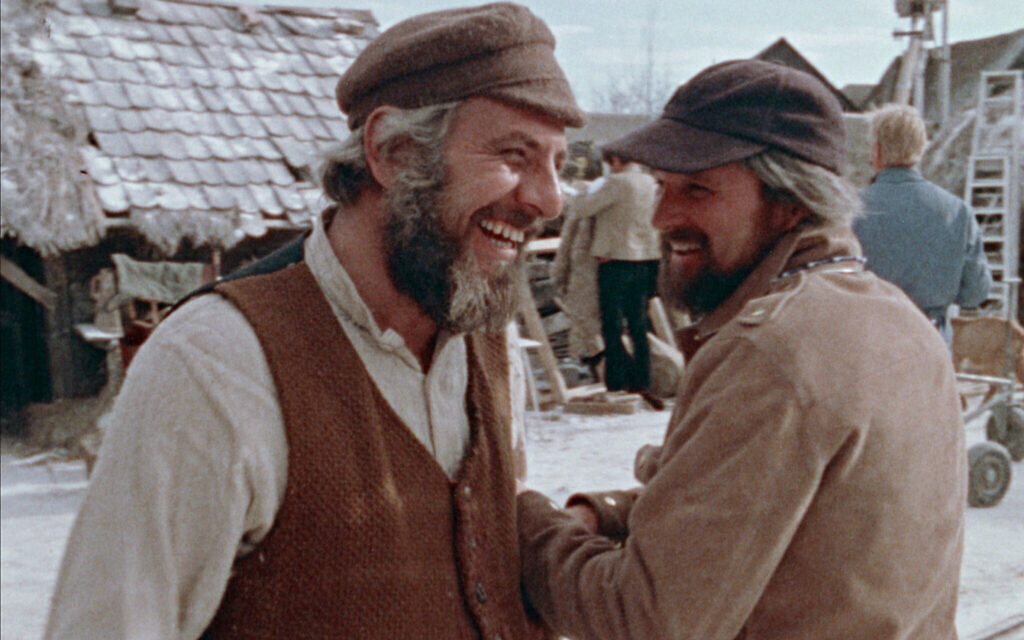 In the late 1960s, director Norman Jewison was in despair over political upheaval in America and around the world. Spiritually discouraged, he was ready to leave Hollywood and stop directing.

United Artists’ invitation to adapt the hit play Fiddler on the Roof for film came at just the right time. Jewison accepted the challenge and the work healed him, he wrote in his 2005 autobiography, “This terrible business has been good for me”.

A new documentary film by Daniel Raim, “A Violinist’s Journey to the Big Screen” opens in New York on April 29 and Los Angeles on May 6. As the title suggests, it’s all about everything that went into making the beloved and iconic 1971 film based on the Yiddish writer Sholom Aleichem‘s stories about the Jews in the settlement area of ​​the Russian Empire at the turn of the 20th century.

Raim’s film is ostensibly about how producer and director Jewison shaped “Fiddler,” but it’s essentially about how “Fiddler,” with its themes of family, tradition, and belief in God, l shaped.

“Jewison was at a tipping point. He saw ‘Fiddler’ as a way for him to really say something,” Raim said.

Speaking to The Times of Israel from his home in Los Angeles, Raim said Jewison was absolutely the right person to direct “Fiddler.”

“But more than that, he had excellent musical sense and was able to create visual structure and elicit touching, real performances from the actors,” he said.

When asked who he had in mind as an audience for his documentary, Raim said it was himself.

Indeed, “Fiddler’s Journey” is a film that will be most enjoyed by hardcore filmmakers and cinephiles interested in the creative details of filmmaking. This is what sets it apart from other “Fiddler”-related documentaries, such as “Fiddler: A Miracle of Miracles” (2019), and “Sholom Aleichem: Laughing in the Darkness” (2011).

However, viewers who have fond memories of watching “Fiddler” over the past half-century will also enjoy Raim’s film. The focus on director Jewison’s personal journey while making the hit 1971 film makes Raim’s film appealing to a wide audience.

Norman Jewison (in baseball cap) directs the filming of the 1971 film “Fiddler on the Roof”. Chaim Topol, who played Tevye, is second from right. (Courtesy of Zeitgeist Films)

We learn of the search for filming locations, which ended up being Lekenik, in Yugoslavia, and Pinewood Studios in London. There is a detailed discussion of the music, choreography, cinematography, set design, casting, and the actors’ approaches to their roles.

The costumes and overall visual style of the film were greatly influenced by famous photographs taken by Romain Vishniac in pre-World War II Eastern European shtetls.

Raim devotes a considerable amount of his film to the decisions that transformed a play with an already large and varied audience into one that would have even more universal appeal.

“To put together a play and get it out into the real world is always a challenge for a director,” says Jewison in “Fiddler’s Journey.”

For the most part, the events in the film’s Anatevka are the same as those in the scene. Some scenes were added, including one showing the violence of a pogrom and the arrest of the political radical Perchik during a rally of workers.

The key issue was finding the right actor to play the lead role of Tevye. Jewison did not want Zero Mostel, who had created the dairy shtetl on Broadway. For Jewison, American Mostel projected a larger-than-life character that wouldn’t work well for the cameras.

Jewison found his Tevye in Chaim Topol (also known by the mononym Topol), who at the time was playing the role in the London production. An Israeli who had grown up listening to his father reciting the stories of Sholom Aleichem from memory, Topol had the sensibility and allure that Jewison was looking for.

Jewison was on the money with his casting decisions, based on the film’s huge financial and critical success around the world (it was nominated for eight Oscars and won three).

“Over a billion people saw the movie, so they couldn’t all be Jewish,” Topol remarked in a 2009 interview with Raim.

‘Fiddler on the Roof’ director Norman Jewison (right) on set in 1970 with Chaim Topol, who played Tevye. (Courtesy of Zeitgeist Films)

It was this universal appeal of “Fiddler” that led Raim to make “Fiddler’s Journey.” Growing up in Israel, Raim had watched “Fiddler” on VHS tape at his grandparents’ home in Haifa.

“It was a portal to a world that no longer existed, to Jewish history in Eastern Europe. It piqued my imagination. But when I went to see Topol during his ‘Fiddler’ farewell tour in Los Angeles in 2009, I saw for myself how much the piece meant to the very heterogeneous audience. That’s when the coin fell for me that I had to make a movie about it,” Raim said.

“Fiddler’s Journey” is in the same vein as Raim’s 2017 film, “Harold and Lillian: A Hollywood Love Story,” about the longtime personal and professional partnership of screenwriter Harold Michelson and his wife, a researcher in cinema Lillian Michelson, who has quietly contributed to the success of the film industry for 60 years.

A photo capturing the set of the 1971 film ‘Fiddler on the Roof’, directed by Norman Jewison. (Courtesy of Zeitgeist Films)

“Fiddler’s Journey” and “Harold and Lillian” show Raim’s love and respect for movies and those who make them.

In fact, there is a connection between the two documentaries. Those who watch “Fiddler’s Journey” will notice that some of the original drawings for “Fiddler” were done by Harold Michelson.

“And Lillian was the researcher for ‘Fiddler.’ She likes to tell how she was trying to find out what kind of underwear girls and young women wore at the turn of the century in shtetls,” Raim said.

“So she came down [the LA Jewish neighborhood of] Fairfax and asked the older Jewish ladies she had seen if they could help her. The ladies went home and brought back paper patterns they had made from what they had worn,” he said.

Despite the ornate sets and feminine bloomers, “Fiddler’s Journey” is at its heart a tribute to the Gentile Jewison, who made a very Jewish story mean so much to people of all backgrounds around the world.

In “Fiddler’s Journey”, Jewison shares the oft-told story that when UA leaders called him to a meeting to ask him to lead “Fiddler”, he told them that despite his last name, he didn’t. was actually not Jewish – and never was. .

“What would you say if I told you I’m a goy [non Jew]?” Jewison tells them.

Some jaws dropped, but that ultimately had no bearing on the leaders’ decision.

‘Fiddler on the Roof’ director Norman Jewison at his home in Malibu, Calif., during an interview with ‘Fiddler’s Journey to the Big Screen’ director Daniel Raim in 2016. (Courtesy courtesy of Zeitgeist Films)

Jewison, from a Protestant family, had occasionally accompanied a Jewish friend to synagogue while growing up in Toronto, Canada, in the 1930s. But that’s the director’s immersion in the search for “Fiddler.” , and his work on the film as a whole, which left an indelible mark.

“I discovered that it was entirely possible for me to identify with Tevye and the Jewish religion,” Jewison says in “Fiddler’s Journey.”

Although he never officially converted, Jewison, now 95, has always had an affinity for Judaism and Jewish culture. He has made several visits to Israel (including sitting next to Prime Minister Golda Meir at the Israeli opening of “Fiddler”). He easily throws Yiddish and Hebrew words into conversation, pronouncing them better than many American Jews.

And in what echoes the beautiful “Sunrise, Sunset” scene in “Fiddler,” Jewison married his second wife under a hoppa (Jewish wedding canopy), with an officiating rabbi.